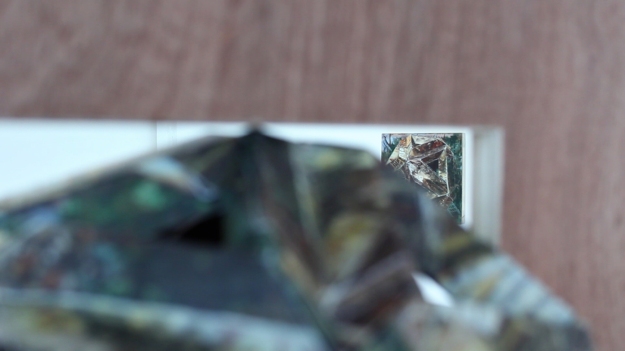 Chelsea Café Project is pleased to present Pleading the Fourth, an exhibition of digital prints by artist James Pimperton. They are a series film stills extracted from a video that documents a previous exhibition, Constellation, held in July this year. They are therefore, a document of a document of an experience of an exhibition; such multiple and referential layers are indicative of the concerns within Pimperton’s wider painting practice.

Pimperton’s process consists of fastidiously creating paintings based on three-dimensional models that he builds out of photographic prints of two-dimensional paintings. In the resulting paintings, the depicted models hover uncannily, suspended in front of the flat image from which they were made. The figure, and the ground within which it sits, modulate into one another creating a sense of dissolution and formlessness that contrasts the highly specific and definite character of the painted representation. The paintings’ overtly referenced forms of production, deconstruction and repetition self-referentially allude to the history of painting as well as the nature of creation itself.

Recently the translation between two and three dimensions has been further explored by exhibiting the models alongside the paintings, thus creating a network of referent and reference across a place as well as within the space of the paintings. The film stills presented here are taken from a video piece that explores the notion of space and place not only in two or three dimensions but also by investigating the fourth dimension, time. The digitally printed stills conflate all the dimensions back to a flat and still screen-like image. They are at once a form of retrospective documentation while at the same time represent a new form of transitional process within the practice and suggest the potential to feedback into future paintings.

Coinciding with this exhibition James will be exhibiting in the MA degree show (4th – 10th September). His painting and sculptural work, on which the stills shown here are based, will be shown in D block, room DG05.

James Pimperton’s paintings make a performance of the act of translation and circulation. Each work quotes from, relates to, or mirrors others; they become riddles of reference and referent. Each painting is a moment of comparative fixity within an ongoing and indefinite passage. They exist within the space in-between; confounding definitive readings, preferring to emphasise an indefinite or transitive character. They challenge us to question our own desire for resolution and stimulate us to find meaning within our own experience.

James Pimperton is a practicing artist and current student of the MA fine art course at Chelsea College of Art. He has exhibited work across the UK with recent shows at George & Jorgen Gallery, Husk Gallery (both in London), Campden Gallery in Gloucestershire, and The Exchange in Penzance. In 2014 he was the recipient of the Zsuzsi Roboz Foundation Scholarship administered by the Chelsea Arts Club Trust.

The Cafe Project is a series of displays of work by students and staff from Chelsea College of Art and Design. These changing displays are a chance to see some of the talent here at Chelsea from across a diverse range of disciplines. The series is curated, in collaboration with CHELSEA space as part of the Public Programme.

For more information please contact Sinead Bligh at info@chelseaspace.org or in person at CHELSEA space.