In response to the current situation, staff at the gallery are working remotely and as a consequence the dates for our next show may be subject to change. Please continue to use our email: info@chelseaspace.org to direct any queries.
Best wishes from us all. 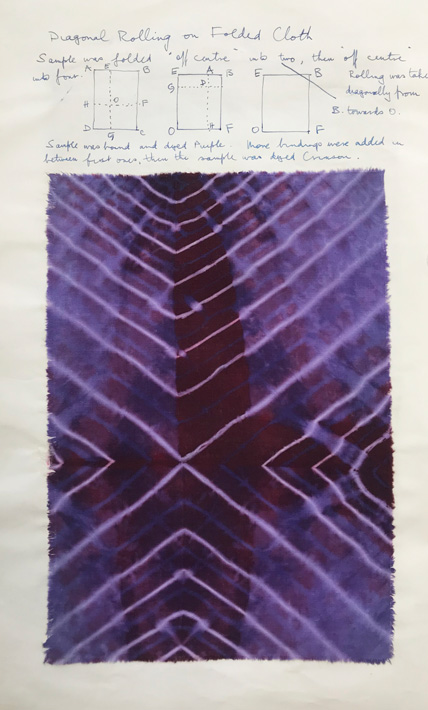 Documentation of a page from Anne Maile’s sample book of dyeing techniques.
Courtesy of LCF Archives.

This exhibition focuses on the context of craft techniques such as resist dyeing, textiles and paper-making within contemporary practices, for a display that also draws upon material from the archive of Anne Maile, an educator and writer who popularised dyeing as a domestic craft in the 1960s, whose archive is held at the London College of Fashion.

Background to Anne Maile’s archive:
Resist dyeing is a traditional method of dyeing textiles with patterns. Techniques such as knotting, binding, folding or sewing are used to ‘resist’ or prevent the dye from reaching all the cloth, thereby creating a pattern. Other forms of resist dyeing use wax or a paste from starch or mud to prevent the dye from penetrating the cloth. Widely used in Eurasia, Africa and South America, early records of this technique have been found in linens used for mummification in Egypt, burial grounds at Astana and Khotan, in now modern-day Kazakhstan and China, and across India, Indonesia, and Thailand. In Japan, the spot technique of shibori was widely used for a variety of cotton and silk fabrics dyed with indigo. In African countries such as Nigeria, Ghana and Cameroon, the technique is often referred to as adire, or adire ido, in India the term bandhana, is frequently used, while tritik, and plangi are found in Indonesia.

The latter-day term ’tie-dye’, or ‘tie and dye’ was popularised in the 1960s through its connections to the psychedelic counterculture, worn by musicians such as Janis Jopin and Jimi Hendrix. With the rise of cheap commercial dyes developed by companies such as Dylon in the UK, tie-dye soon became a craft that could be produced easily at home. Anne Maile, who popularised the technique through her books, Tie and Dye as a Present Day Craft (1963), and Tie and Dye Made Easy (1971), presented the immense range and sophistication of the craft, with historical information, diagrams and photographic samples to guide readers through a range of techniques and processes.

Anne Maile was introduced to tie-dye when attending evening classes at Camberwell School of Arts and Crafts (as it was then called) in the early 1950s. With training as a dress designer and experience of working in knitwear, Maile was at this time primarily looking after her young children, and so tie-dye was attractive to her as it was a skill she could develop domestically with minimal equipment. As well as publishing books Maile would teach at Camberwell as well as for ILEA (Inner London Education Authority) in schools and colleges in the Greater London area, delivering workshops and training for teachers.